Posted on February 3, 2014 by princessdeloso 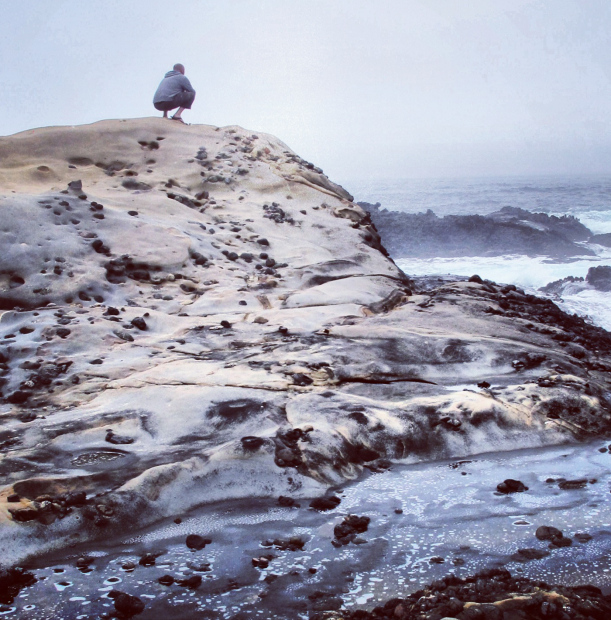 Chris squatted down on the lava outcropping and contemplated the ocean churning below on the rocks.  The water reflected the steel grey of the sky; sullen and threatening.  The breeze coming onshore was still relatively warm, but every so often a cold gust came along that sent shivers along Chris’ arms and legs.  As the first tentative drops of rain began to fall, he flipped the hood of his sweatshirt up over his close shaven head while his eyes never stopped scanning the horizon.  Back and forth his gaze shifted as he hoped to see the mast of his father’s sailboat peak above the roiling sea.  When the rain began to come down in earnest, Chris stood up and began his careful descent from the ancient lava flow, avoiding the sharp, cutting edges of the black rock.  When he returned to his family’s home, his younger sister, Maria, came to the door and gave him a towel.

“Did you see anything?” she asked although she already knew the answer.

Chris shook his head as he dried off his exposed skin.  “Not yet.”

Once he finished getting the worst of the rain off himself, he kicked his chanclas off at the front door and went inside.  Maria followed him, her brows furrowed with worry.

“I’m going to head down to the dock and see if any of the other fishermen saw him.  Maybe he put in somewhere else.”  Chris grabbed his sneakers and a rain poncho, then headed back out the door.  As he started down the worn path to the village he turned to his sister, “Keep your chin up.  He’s been out in worse.”

At the dock, only a handful of old men were still out in the elements, securing lines and stowing gear.  They all looked up when Chris came striding down the wooden planks.  The eldest of the group, Manolo, addressed Chris, “Cristobal, donde esta tu padre?”

In unison all the men shook their heads.  “Estara bien,” Manolo finally said.  “Santiago,  he is a strong man.”

Chris weakly nodded his head.  A lightning bolt struck about a mile off in the water, and the crack of thunder shook the dock.  The men finished their duties and hurried up the planking as the sky opened up with torrential rain.  Manolo stayed with Chris for a few moments and searched the storm angered sea with the young man.  But the rain made short work of his meager clothes and in only a few seconds he was soaked through to the skin.  He patted Chris on the shoulder, turned and made his way to the top of the dock.

He turned and gave a final perusal of the horizon.  As lightning flashed in the clouds, Manolo, from his slightly higher vantage point, spied the top of a sail as it crested the horizon. It disappeared almost immediately amongst the roiling swells but after a few agonizing moments it appeared again.  The blue and white sail of his oldest friend was definitely coming closer.

“Cristobal!” Manolo shouted.  “Mira!”  He pointed in the direction of the approaching boat.

Chris focused his attention where Manolo indicated.  After what felt like an eternity, he also saw his father’s sailboat.  Even at the distance it was, Chris could see it was listing badly to starboard.  Together, both men crossed themselves then touched the St. Peter’s medal around their necks.  A medal all fishermen wore.

It was nearly a half hour before the sailboat finally reached the small seaside dock.  By that time the squall had blown itself out and the other fishermen returned to welcome the errant fisherman back to safe harbor.  Maria, had even come down to the dock once the rain had stopped.  With his arm around his sister, Chris could see that the list of the boat had more to do with an added passenger than from damage to the vessel.  A marlin, about ten feet in length, was lashed to the side of the boat.  His father had been successful.

Santiago prepared to dock his boat on its port side.  He threw lines to the waiting men, and they pulled him in and tied the boat securely.  Once the sail was lowered and secured to the mast did Santiago disembark.

“Amigo viejo,” Manolo greeted his friend.  “You worry your children.”

Santiago saw the look of relief in his children’s eyes that only comes after hours of worry.  It was a common expression in a fishing village.  He went and hugged both Maria and Chris.  For him, the worry was worth it.  The marlin, though small would bring in a good payday.  For Chris and Maria, it was simply la vida.

This story was inspired by the Weekly Writing Challenge.  It always amazing where an image can lead our mind.

For this week’s challenge, use one of the images in this gallery as a starting point for a short story, poem, free-write, or musing on whatever you’d like. The one-word captions — from contemplation to emptiness — are things I personally think about when I view these images. But photography triggers different ideas and emotions in all of us, given our varied paths and perspectives. In the image of the man looking out into the sea, I may think he’s contemplating in peace and enjoying the view, but you might wonder what he’s staring at. What troubles he may have. Or, if someone is watching him from behind.

I do many things. I even write about some of them.
View all posts by princessdeloso →
This entry was posted in Fiction, Writing and tagged contemplation, Creative Writing, DPChallenge, fish, fishing, Flash Fiction, Weekly Writing Challenge, Writing. Bookmark the permalink.

Please let me know what you think Cancel reply