A View Off The Porch – Dougan Falls

Posted on January 2, 2014 by princessdeloso

It’s been quite some time since I’ve been able to do a View Of The Porch post.  We have been busy with chores, visiting friends, and life in general.  The day after Christmas found us (read me) bored and a little stir crazy.  I wanted to get out of the cabin and go somewhere, but didn’t know where.  Poncho suggested a short drive to an area that is quite popular with the summer crowd – Dougan Falls.  I had only been there once several years ago, and we didn’t really stop to look around.

Dougan Falls are located on the Washougal River in Skamania County Washington.  A rather large pool right after the falls is a popular swimming hole for those trying to cool off on the hot summer days here in the Pacific Northwest.  Of course this day we were blissfully by ourselves, so could marvel at the beauty without interruption.

I imagine the falls can be quite spectacular when enveloped by a blanket of winter snow, but we have had a very dry autumn and winter so far.

The bridge over the Washougal River spans a small waterfall and looking directly down can cause quite a bit of vertigo.  I’m very thankful the bridge was sturdy.

I do like how the late afternoon light reflected in the pool just before the water began its cascade. 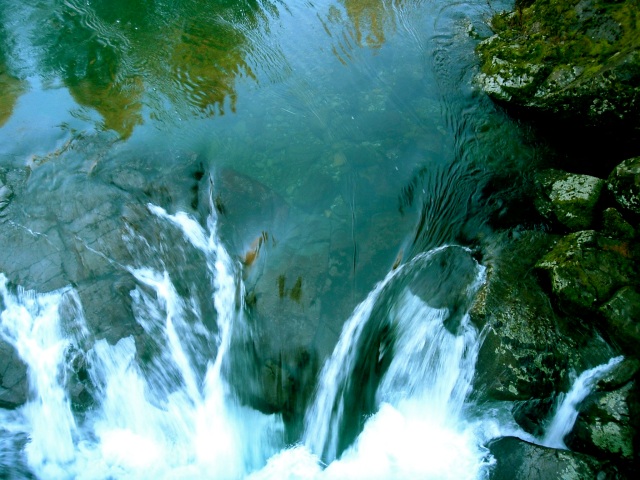 After Dougan Falls, the Washougal River hits Salmon Falls then feeds into the Columbia River.  I love how the low southern sun hits the mountains in the late afternoon.  The color is quite spectacular.

“Explorers Merriweather Lewis and William Clark referred to the Washougal River as the ‘Seal River.’  The name Washougal comes from the Cascade Chinook placename /wasiixwal/ or /wasuxal/, meaning ‘rushing water’.  It has been suggested that D. B. Cooper, who hijacked a Boeing 727 in 1971 then parachuted from the plane with the ransom money, may have landed in the Washougal River Basin.” – Wikipedia

6 Responses to A View Off The Porch – Dougan Falls

Please let me know what you think Cancel reply